What I've Learned from 20 Years of Running EMS

After 20 years of leading EMS, chief executive Keith Austin thought he’d seen it all. Then along came 2020. These are his reflections on the highs, lows, mistakes and lessons of a remarkable two-decade journey.

Back in October 2000, when we made the decision to set up EMS, our rationale was clear. I’d worked for roadshow truck agencies and there was a gap in the market. Nobody was offering a full end-to-end roadshow service, from strategy and design through to logistics, operations and roll-out. I’d seen clients juggling with multiple suppliers and thought ‘we could fix that’. So we took a leap of faith and formed EMS. We had no idea what was to come next.

“All our projects played a part in where we are today.”

Our first project was for a three-day display at the NEC with the Professional Golfers’ Association (PGA). We only made a few thousand in profit and we used it to set up the business. That was the model: putting profits from new projects straight back into the business. We were committed to avoiding overdrafts.

Macmillan was our first long-term project. We toured a mobile information centre, which at the time was the country’s most comprehensive cancer library, all around the UK. It must have worked, because 20 years on Macmillan still uses smaller information vehicles to engage with the public in city centres, shopping parks and supermarkets. 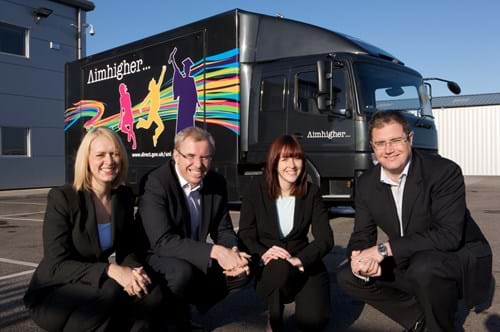 In 2001, we had another significant moment. We won a contract with the Department of Education to deliver the Aimhigher tour, inspiring children from disadvantaged communities to go to university. It was a big milestone. Our fleet expanded with 10 new trucks and the tour reached over a million students in nine years. It was hailed as “the best education initiative in years” by teachers. And we felt the impact, too. As well as our fleet growing, so too did our team.

“Unless you keep growing and developing, you’re going backwards.”

So the business was doing well. Our fleet, team and clients were all expanding. But we wanted to be the best – and that meant working internationally. Nobody in the UK was doing that, so we knew it would take us to the next level.

We found a partner in the USA – MRA – and looked outside Europe for ideal roadshow destinations. The Middle East struck us immediately as a good cultural fit. There was a preference to do business face-to-face, and global businesses and agencies were flocking to the region. We secured Parker Hannifin, our first Middle East client, in 2007. Word soon spread, and by 2013 we were setting up an office in Media City, Dubai.

Initially, we thought we’d cracked it. Then reality bit. Despite meeting after meeting, we weren’t achieving what we’d hoped. In 2017, things took a turn when we won a contract with the King Abdullah Foundation. We will never forget this campaign. It was, without doubt, the tour that nearly broke us – mentally at least. We had never experienced stress like it. Long hours and sleepless nights are par for the course in the event industry, but this was something else altogether.

Cultural differences and the pressure of working for, and being in the presence of, Saudi Arabian royalty had us in bits. The fear of offending or not meeting expectations pushed us to the very edge. But we survived and it turned into one of many ‘pinch me’ moments. We’ve actually had British royalty on our trucks too – the Queen wearing VR glasses on an AMRC tour is right up there in our all-time memories.

The Birth of EMS Healthcare

“Everyone thought I was crazy, but I was just excited about the possibilities.”

Launching EMS Healthcare in 2011 taught us a major lesson. You can have the best idea in the world. But if you’re working with the NHS, you won’t succeed unless you tick every box and get every stakeholder engaged. 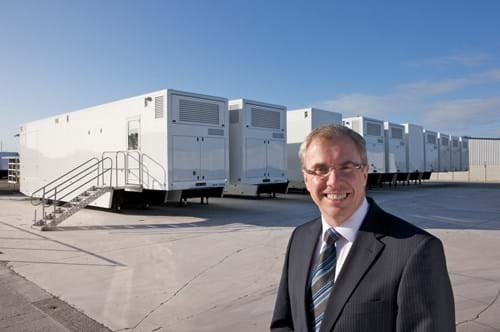 When a private healthcare provider’s contract with the NHS failed, 40 brand-new medicals units went up for sale. I went to look at them and was immediately faced with the realisation of what could happen if things went wrong. They were unsuitable for our marketing business. But I was convinced we could make them work in the healthcare sector – even though people thought I was crazy.

In the end, we bought 24. EMS Healthcare Ltd was born. And the EMS Group started to grow rapidly.

Riding Against the Tide

“We’ve thrived when businesses are forced to do something different.”

In our early days, things were simpler. We celebrated every contract win. Then the 2008 financial crisis came. For many, it was an event that changed everything. But we were fortunate. Suddenly, businesses needed to react quickly and with smaller budgets – we could activate campaigns that focused their efforts and their message.

We went on to work with several blue-chip clients on B2B roadshows and internal comms campaigns. At the same time, our healthcare division was developing nicely. Our fleet was growing, utilisation rates were good and we navigated the recession well. But things can always change, and our business is no different.

Coping with the Unexpected

“A few mistimed decisions or assumptions could mean losing everything.”

In 2017, we moved into our purpose-built office and production facilities. We thought growth was a given. In reality, it turned out to be the worst financial period we’ve ever experienced. 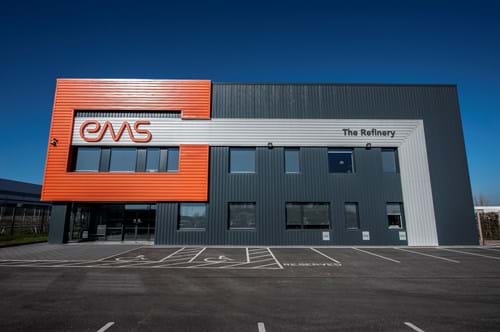 For two years, we didn’t know how we would keep going. We restructured the team and cut our fixed costs just to survive. But we also took on some of our most exciting and interesting short-term projects. Most importantly, we learned how to adapt. Everything we did was about keeping going.

Today, we’re stronger for it. We continue to have an excellent management team from different backgrounds and with different experiences. And while we look forward with confidence, we’re also grateful to have come this far.

The Biggest Shock of All

“A rollercoaster we could never have predicted.”

2020 was our 20th year. It’s been the biggest shock I’ll ever see. Everything started strongly: tours were lined up and we were projecting a record year. Then March came along and everything disappeared.

At the pandemic’s peak, we had 82% of our staff on furlough and no visibility of any future business. We started to think about how we could pivot our marketing team to support the healthcare division, which had stayed relatively busy.

One day, we had over half of our fleet in the yard. But the healthcare industry was under unprecedented demand as it fought COVID-19. And so the next day, we were at 95% utilisation. I don’t think I’ll ever see a change like that again.

We’re now helping the NHS’s national COVID testing programme. We’ve launched three mobile labs and we’re supporting several clinical trials. None of this would have been possible without the investment we’d made – and battled through – in our own production facilities.

Looking to the Future

“When events come back, the activity will be huge.”

We know how hard things have been for the events industry. We’re fortunate to be in a position where we can adapt, and we know many others can’t. We don’t for one second take that for granted.

After a year like 2020, predictions are nigh-on impossible. But I’ll give it a go.

Once the vaccine is rolled out, businesses will want to get back to face-to-face experiences. But they’ll also want more contingencies with an event space that is inherently flexible. We’re expecting next year to be our busiest ever.

We have an extraordinary team. 2021 is full of possibilities, and so are the years beyond that. For the first time in our history, we start the year having already secured our target revenue. That’s a fantastic foundation for the next 12 months. And looking even further ahead, I can’t wait to see where we grow over the next three years. As 2020 has shown, anything is possible.

For more information about the EMS Group, please visit the EMS Healthcare and EMS Production websites.