For many businesses, the Middle East is unchartered territory, but for those that have successfully entered the region, it is proving an incomparable opportunity for growth. This is something we learnt first hand through expanding Event Marketing Solutions to Dubai and spearheading the roadshow industry across the region.

There’s currently billions being poured into developing the infrastructure and technology across Middle Eastern countries as they play catch up with western economies. The first half of 2017 alone saw a total of 87 investment deals with Middle East start-up businesses, amounting to $140m, whilst Amazon’s recent $580 million acquisition of Dubai-based ecommerce company, Souq.com, gives a nod to the region’s impending digital revolution.

These deals are only the tip of the iceberg when it comes to evidence that opportunity is really taking off in the Middle East, especially within digital. Forbes has recently revealed that the UAE, Bahrain and Qatar are some of the world’s most digitised countries, with social media adoption 70 per cent higher than in the USA. And it is not just consumers who are on board with modern technology, with some of the biggest oil companies in the GCC enlisting big data, analytics, sensors and control systems to digitise oilfields.

However, the contribution of the digital economy in the Middle East to GDP still only accounts for 4.1 per cent – half that of the USA. There’s a clear gap between digital usage and the lack of infrastructure to support it, but with digital advertising in GCC states predicted to grow by 9.1 per cent in 2017, now is a perfect time for established businesses to take their expertise to the Middle East. 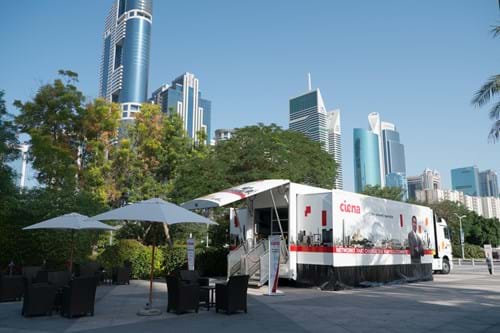 Being on the brink of a digital revolution has already encouraged many businesses do this, and roadshows are proving an agile solution for entering the region, helping businesses such as Cisco, SAP and HP to go beyond the trade show floor and educate clients that would otherwise be hard to reach.

We took the decision to expand in 2008, when an existing client wanted to take its roadshow to the Middle East but could not find a specialist within the region to execute the tour. This gave us the platform to start managing tours across the region and develop our niche as the only roadshow agency operating in the Middle East. Fast-forward five years to 2013, and the rise in businesses coming to the GCC provided us the opportunities and scale to open an office in Dubai.

We remain the only roadshow specialists to set foot in the Middle East, and almost a decade of experience now means we have a well-established presence in eight of the regions’ most lucrative countries, including Saudi Arabia, Bahrain, Qatar and Dubai. This enables our clients to run consistent roadshow campaigns across multiple continents, such as our tour with Ciena, which spent three years visiting 19 EMEA locations, including KSA, Kuwait, UAE and Israel.

There has never been a better opportunity for technology companies to scale up and expand to the Middle East, gaining on the ground experience before the region goes ‘mainstream’. If your business is looking for support in expanding to the Middle East, get in touch and we’ll be happy to offer advice and work with you to create a bespoke roadshow campaign.