Recreating an intimate fan connection - Can Manchester United do it?

It is a huge irony that in a world more connected than ever, we are all increasingly out of touch.

Emails and WhatsApp have replaced the three-hour lunch, conference calls and FaceTime have removed the need for direct, personal, interaction and the internet has completely and utterly transformed how we interact, where we interact and with who we interact.

Yet, despite all that, certain business methods hold true, across the ages and across the technological revolution that will so define this coming century.

And one of those tenets is this...

When it comes to improving business connections, creating long-standing relationships and, in the case of sporting behemoths like Manchester United, finding and developing new fanbases, nothing yet designed can match the good, old-fashioned method of getting out there and interacting with people on an intrinsic, human level.

We, all of us, are far more than a phone screen - we are more than an email address or a Facebook account.

And major sporting bodies are starting to realise that more than ever.

It seems absurd to suggest that Manchester United, the biggest football club on the planet, still needs to work hard to engage their current fanbase - while also looking to grow their following across the globe – but they did not get to their current position by resting on their laurels – nor their success on the pitch. 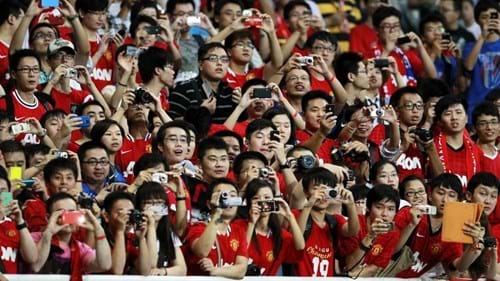 With the unveiling of plans to open three club-themed interactive centres in China by 2020, United continue to establish themselves as market leaders when it comes to fan engagement and innovation. At the centres, fans will be able to buy merchandise, watch the game with crowds of fellow supporters and learn more about the club’s history through an engaging interactive experience – all this, despite being over 4,000 miles away from the Theatre of Dreams.

The club has invested heavily in its China presence for some time, doing pre-season tours of the region since 1975, and most recently in 2016. What’s clear is that Manchester United recognise the value of intimate, interactive experiences when it comes to engaging with existing and prospective fans.

Many of us will have fond memories of our first live match day experience, walking through the turnstile, climbing the steps and being hit by the wave of noise; fans belting out the club’s signature songs and the atmosphere making every touch of the ball feel as important as life or death.

But what about the young fans of today?

With rising ticket and transport costs, experiencing these kinds of moments has become increasingly difficult, especially for those living miles away from their team. Even with pre-season tours, when teams travel around the globe to directly engage with far-afield fans, there can be real economic barriers to getting that intimate fan experience.

Some sports associations, such as the NBA, have taken the initiative to host in-season games in Europe, this year’s game at London’s O2 accompanied by a week-long programme of community outreach initiatives and junior sports programs.

Although slightly different to Manchester United’s approach, this focus on community interaction and engagement is another example of leaders in sport recognising the value in a direct face-to-face approach.