Perhaps one of the most iconic roadshow trucks in the world – the Coca Cola truck visits many cities throughout the UK to the delight of children and adults alike, spreading Christmas cheer (and some free cans of cola too!). Its success is partly due to the amount of excitement this type of truck generates - the hype around its inevitable return to a city near you almost reaches fever pitch. Flashing lights, interactive screens, beautiful artwork and a completely on-brand truck are just a few of the ways Coca Cola whip the public up into a frenzy. Here at EMS we decided to delve into the origins of this now iconic vehicle.

When did it all start?

Contrary to popular belief, the Coca-Cola Christmas truck took its maiden voyage in 1995. It’s easy to think that this truck has been around for decades longer as its reach and influence has resulted in it becoming another Christmas tradition. The first trucks were created by agency W.B. Doner and incorporated effects made by the Industrial Light and Magic crew – famous for their work on the likes of Star Wars and Raiders Of The Lost Ark.

Where did that iconic Santa Claus image come from? 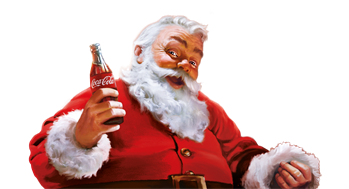 Another myth was that Coca-Cola was responsible for the way Santa Claus looks. We all imagine Father Christmas as a jolly fat man with a red suit and giant white beard, but Coca-Cola did not “invent” this look. Famed Swedish-American artist Haddon Sundblom created magazine adverts for the company in 1931 using Clement Clark Moore's 1822 poem 'The night before Christmas' as inspiration. In this poem St Nicholas was described as a kind, jovial man in a red suit so Sundblom created the image we see today.

Coca-Cola is partly responsible for this now iconic image, but they cannot take full credit.

How many Locations will the truck take in?

According to official reports from Coca-Cola, the Christmas truck will stop at 45 points throughout the UK and make its last stop of the year in Wembley on the 23rd of December. Over 200,000 fans had their photograph taken with this iconic roadshow truck last year, with thousands more photos being shared on social media complete with dedicated hashtag #holidaysarecoming.

The Coca-Cola truck highlights how much buzz can be generated about a brand or new product. Fortunately customers and prospects don’t have to wait until Christmas to enjoy a roadshow truck as EMS create hundreds of campaigns throughout the year for a variety of brands, generating interest, awareness, brand loyalty and of course excitement along the way.

The team at EMS understands the value of these roadshow trucks as they know first-hand how beneficial they are. Demographics can be reached simply by travelling to the appropriate area, results can be measured and brand message can be achieved easily through the use of trained and dedicated brand ambassadors.

To discuss how a roadshow truck could benefit your organisation and promote your products and/or services get in touch.

Merry Christmas and best wishes from all the team.