Cutting-through a digital world: how to achieve 53% customer conversion

We live in a technologically driven world. There’s no doubt about it – it follows us everywhere (literally, if we’re talking about GPS, location services, remarketing…). Those companies that continue to use new tech solutions now will be the ones that survive the future, and we’ve seen what happens to those that deny it.

Where does Blockbuster fit in a world with Netflix, for example? We’re living on a planet that we couldn’t have imagined 10, 15 years ago, with everyday life being enhanced at every turn – from driverless taxis taking to the streets, to pizza delivered by drone and, of course, everyone’s newest housemate, Alexa. You’d be forgiven for believing that the machines are taking over. But fear not, for the brands behind the technology, and those that are using it, don’t exist in the digital world alone, and neither do their consumers.

This is proven by the likes of Facebook, which recently funded a physical experiential event in London to bring to life online safety challenges faced by young people. It’s proven by Snapchat, which opened a series of pop-up shops in the world’s most lucrative shopping districts to sell nothing but ‘Spectacles’ through a vending machine. It’s why marketing agencies are jumping onto the trend of developing experiential divisions to work alongside digital, social and traditional forms of marketing.

Even the leading digital businesses recognise that not everything can be at its most powerful when it is only available online. When there’s an important message to shout about, it is much clearer to hear in person. Realising the potential of experiential is creating a movement towards more traditional marketing methods. We’re seeing brands achieve cut-through by rewinding the clock – going beyond the digital world to get face-to-face with their consumers. It’s about more than raising brand awareness, it about achieving results.

Although impressive, even these statistics often don’t do justice to the results seen across experiential. When the £9,000 tuition fees were introduced, Student Finance needed to reassure prospective students that the new system wasn’t a barrier to going to university. The company decided to launch a roadshow with Event Marketing Solutions. It’s now in its seventh year, touring the UK to give prospective university students and their parents the chance to learn about financial student support available by speaking to recent graduates.

Since 2010, over 1,000,000 students and parents not only saw the tour, but interacted with it and engaged with the graduates at the heart of it. So whilst ONS statistics suggest that 99 per cent of young adults are active internet users, there aren’t many brands that can say they’ve achieved the same results with digital marketing.

Yet, digital marketing takes up so much of a brand’s advertising spend. And on the face of it we may think “Well, why wouldn’t it?”; Ofcom reported that the UK’s online audience is 50.4 million. 76 per cent of people own a smart phone. The average person spends 83 hours per month online – 279 hours if you’re a teenager according to a study by Common Sense Media. So, it’s natural that the advertising gurus would tap into such a vast audience, and it is no shock that in 2016 UK advertising expenditure exceeded £10 billion, 46 per cent of the total advertising spend for that year. 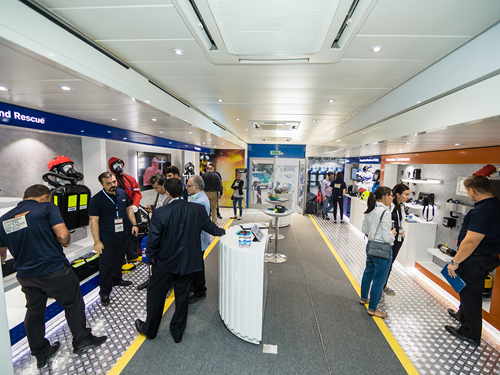 But it comes with a catch – imagine you’re in a room of 1,000 people who directly meet your target audience. Great! What could be better, right? But these people are also the target audience for 1,000 other businesses, which all come and join you in the room. It’s suddenly immensely overcrowded. You try and grab the attention of at least one of your potential customers, but most of them are put off by the noise in the room and block it out completely, preferring not to speak to anyone. Some of them already know who they want to speak to and walk straight past you until they find someone familiar.

The point being, if you partner the opportunity to access an ideal audience in high numbers with a relatively low cost per interaction, as we see with many online methods of advertising, it encourages a saturated market and makes it difficult to actually stand out.

Yes, on the surface digital marketing seems like a cost-effective tool, but scratch off some of the gloss and the image is rather different. Only 35 per cent of digital display adverts see any views at all, says research firm Lumen, whilst only 9 per cent of those that were viewed received more than one second’s worth of attention. Only 4 per cent received more than two seconds. Even the younger generations are clocking on to the annoying nature of online advertising, with 52 per cent of 12-15 year-olds naming it as one of their biggest online dislikes.

But brands aren’t stupid. They recognise this and they’re moving beyond it. More interactive digital platforms are finding their legs as we see increased engagement with Facebook Live, Snapchat, and Instagram stories. However, these platforms, whilst better than inundating consumers with lifeless display adverts, still rely on gaining that initial spark of attention. There still isn’t a way of knowing if they’ve walked away from the screen whilst a video is playing, or if they’ve immediately tapped their way onto the next story.

Brands need to remind themselves that the best way to grasp – and keep – attention is away from notifications and away from the scrolling nature of social media. Consumers need something different that will outlive their eight-second attention span (which is, apparently, shorter than a goldfish’s).

In order to actually connect with audiences, get to know them, and build a worthwhile relationship we need to think outside the box – whether that box is smartphone, tablet or desktop-shaped. There’s so much more to our lives than the internet alone, and there’s no denying the impact of a live experience. So, it makes sense to speak to our customers not just via digital or social, but out in the big wide world as well. Let’s embrace technology, but never forget the value of a face-to-face interaction.