With Christmas on the horizon, I can’t help but be drawn to the iconic Coca-Cola truck tour which started just last week and will visit 46 locations across the UK. With its all-American look and famous ‘Holidays are Coming’ soundtrack, it’s without doubt one of the most successful and attention grabbing roadshows in the world. 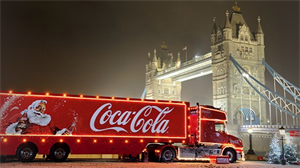 So, how have Coca-Cola turned what is essentially a fleet of brightly lit red trucks giving out free drinks into something that symbolises the start of Christmas for millions of people?

Obviously it helps to have a globally-recognised brand and Coca-Cola pushes that alongside its Christmas roadshow through a wide-ranging, multi-channel advertising campaign that includes TV, radio and digital platforms. Social media also plays an influential role and this year there’s been an even bigger build-up – with Coca-Cola promising a reveal of tour locations once a specific tweet received 500 retweets. The social media excitement continues with the hashtag ‪#HolidaysAreComing‪‬‬‬‬‬‬, which even has a life beyond the Coca-Cola campaign, with people using the hashtag ‪#HolidaysAreComing‪ for anything Christmas related. 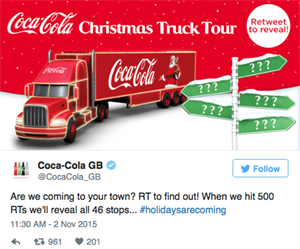 With social media usage at its highest ever, it’s no surprise that the Coca-Cola tour’s success is fuelled by our obsession to photograph, document and share everything we do. In August this year, Facebook celebrated the first day over a billion people used Facebook on a single day (for context, that’s 1 in 7 people on Earth using Facebook) and the number of active accounts on all platforms continues to increase, as seen in these figures by Statista.

With the Coca-Cola roadshow, the anticipation, excitement and desire to join in (or fear of missing out) is generated from getting up close and personal with the famous vehicle. At each location they create a buzz before, during and after the event, encouraging people to make sure they get to see it and have a picture to prove it!

With all its success it is somewhat surprising that few brands have chosen to do a similar experiential activity until now. This year Cadbury have launched a Christmas roadshow truck campaign with 24 branded trucks – one for each ‘door’ of an advent calendar: 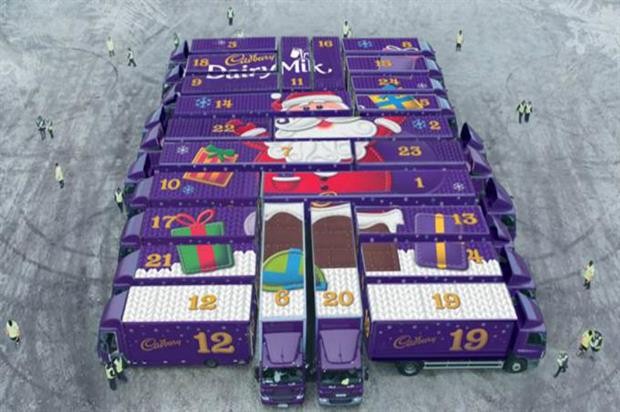 Every day throughout December, the appropriately numbered truck will travel to locations throughout the UK and Ireland, greeting the public with Cadbury treats and other surprises. Reactions to the visits from the ‘ultimate advent calendars’ will then be filmed and shared on television, video on-demand and online platforms, as part of Cadbury's biggest seasonal advertising campaign to date, using the hashtag #Cadvent.

Both the Coca-Cola and the more recent Cadbury tour show that getting on the road and meeting people face-to-face is a winning recipe for a successful seasonal campaign. Last year the Coca-Cola Truck Tour website received nearly two million hits and 50,000 official customer photos were taken, so it will be interesting to see if they can top that in 2016. As a brand, Coca-Cola has dominated Christmas for decades so personally I’m also looking forward to seeing if Cadbury – or anyone else for that matter – can stake a claim for that spot right at the top of the event marketing Christmas tree.