Imagine it’s 1918. You’re in Britain and women have just been granted the right to vote. Uproar! “Why should women be allowed to vote?” preach the traditionalists, “their place is at home!”

Fast forward to 2017 and these views seem completely archaic – why wouldn’t women be able to vote?

Saudi Arabia is currently going through this transition, some 99 years later. In December 2015, women were allowed to vote in an election for the first time, and only recently have they been granted the right to drive. This marks a huge step in the long journey to equality that even Britain – liberal as it seems – hasn’t fully achieved yet. 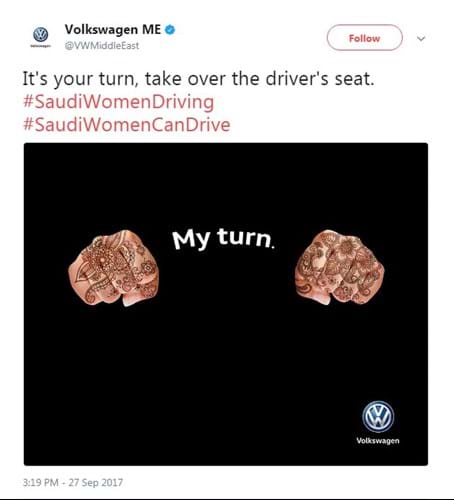 But what will this mean for businesses? Of course, car manufacturers scrambled to get the first tweet to the women of Saudi; “It’s your turn, take over the driver’s seat #SaudiWomenDriving #SaudiWomenCanDrive”, Volkswagen hailed from behind its keyboard. But what will they really need to do to reach those nine million new drivers King Salman has just enabled?

A message to car manufacturers – women of the world beg of you not to make the same mistakes you made with us. In the US, 74 per cent of women feel that you misunderstand them even though they influence 85 per cent of car purchases!

Don’t get me wrong; a tweet to the nation that has the highest penetration of Twitter users in the world is certainly a necessity, and will create resonance with and support of the brand, but would you buy a car based on 140 characters?

No, this is a unique opportunity that won’t come around again, so car manufacturers will need to understand who Saudi women are and know exactly what they want. It won’t happen over via social media alone. Heck, it won’t happen via the internet alone. Saudi Arabia is a vast Kingdom, rich in culture – it’s a treasure chest of opportunity. If companies are to capitalise on the 15-20 per cent raise in annual car sales in the world’s largest importer of vehicles, they’ll need to meet the women that have waited so long for what we all consider normal.

And it isn’t just car manufacturers that will feel the waves of change. As a woman who already travels across Saudi for business – alone – on a regular basis, I can tell you I’m treated with the finest respect, whilst almost a third of businesses in the Kingdom are owned by female entrepreneurs. It’s not all doom and gloom for women in the Middle East, and it’s becoming much better.

Think of everything that women have achieved in Britain since 1918. Women being able to drive in Saudi is just one example of how the Middle East is building the foundations to become the next global powerhouse.